We were pleased to win a 2017 Technical Invention Prize from OISTAT for our Netting Stretcher. 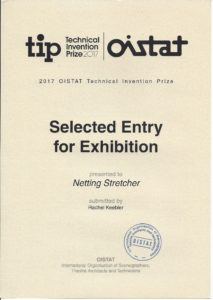 In the entry, Rachel wrote “Often enough, scenic artists need to paint a backdrop which will have a substantial cut-out. No matter what shape, the lower part of the backdrop below the hole needs to be supported.  The standard way to do that most invisibly is to fill the cut-out with scenic netting (also known as opera netting). The netting looks a bit like fishnet but is made of cotton strings.  The kind we use is black and has 1″ square holes.  The strings must be oriented vertically and horizontally and must be tight.  The netting is essentially replacing the muslin which has been cut out.
Before I invented these netting stretchers, we struggled with different methods of getting the netting even and square.  In order to stretch it across the back of a drop that’s on the floor we needed to attach it securely to the floor as well. Taping was not secure enough and was troublesome when moving things to adjust square-ness. Stapling the net down also made for difficulty adjusting the tension and square-ness. Up-side down carpet tack strips were used, too, but the tacks sticking up were both irregularly spaced and so sharp such that many injuries occurred.
The idea for my design came when I was thinking about the problem and talking with a friend.  I recall saying what we really needed is something with slots in it every 1″ which we can slip the netting into, but which we can attach to the floor with a minimal number of staples.Grabbing a pencil, I started thinking and came up with this netting stretcher.  Luckily, we had someone to make them, and she made a lot of them, which is good because sometimes you need many.” 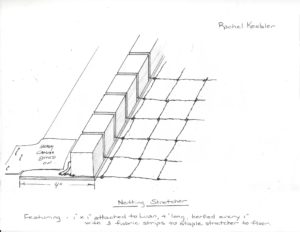