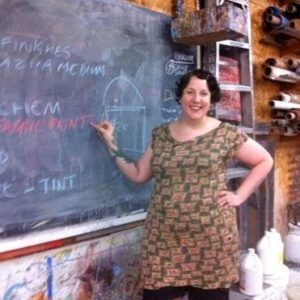 Jenny Stanjeski earned her BFA in Theatrical Design form Carnegie Mellon University in 1999. After returning to New York, she worked as a scenic artist Off-Broadway while continuing her studies of painting and the figure at The Art Students League and The New York Academy. During the first, slow New York summers she traveled to the Colorado Shakespeare festival where she worked as a charge as well as offering her experience as a guest lecturer and drawing instructor. Upon joining the United Scenic Artists Union 829 in 2003, she led the paint shop for Manhattan Theater Club. In 2005 she was proud to be chosen for Bill Riley’s Second at Showman Fabricators, eventually taking on the role as Charge Artist producing sets for Broadway and Television.

Most recently, Jenny has made the move uptown from Broadway to Lincoln Center where she now resides as Scenic Charge artist at The Juilliard School. She has embraced the opportunity to combine her two passions for painting and mentoring young artists in an environment that encourages creativity at the highest standard. Even outside of Julliard Jenny loves to share and celebrate her enthusiasm for the arts, and hosts an 18th century-style salon in her cozy Greenpoint painting studio, where she showcases the art and music of her talented friends and muses, for the enjoyment and education of their audience.