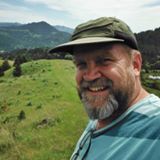 Joe Rial’s life in theatre began in the 80’s on Kauai Hawaii, with children’s programs in the schools and the local community groups. From the limited resources of the island, Joe began working with cardboard and masking tape and other supplies that could be easily ordered or scrounged. He became known for a MacGyver-like approach to fabrication using recycled materials. He was a t-shirt artist so was able to use the airbrush to complete subtle surfaces and light in paint, compensating where such resources and training were limited. After nearly a decade of freelance, scrabble, and a 5 country walk about, Joe went to college to learn how theatre was done professionally. To help pay for this, he continued to freelance where ever possible and teach any creative class he could arrange.

Joe Rial received a B.A. in theatre at the University of Hawaii at Manoa and was exposed to many foreign conventions, especially Asian theatre. He worked on a number of mask and puppet productions and learned to build shows from the ground up. He also went on a Japanese Game Show (3 times) even winning a white guy award. Joe went on to study at the Krannert Center for a year at the University of Illinois before getting his M.F.A. at Illinois State University. There, the Illinois Shakespeare Festival exposed Joe to casting, everything from heads on stakes, to casting common objects to create ornate embellishments on furniture and props. After a decade of study and production, Joe began teaching as an Assistant Professor of Scenic and Lighting Design at SUNY Oswego. While there, he met Rachel Keebler at the USITT convention in 2005 where she asked him to come teach TTSP at Cobalt Studios.

Nearly two decades later, after some great collaborations with Squonk Opera, and Peggy Shaw of Split Britches to name a few; a stint with The Dream Freedom Revival- a group of freedom fighting activists, and a preschool classroom, Joe has returned to the West Coast to be near family. Living in the redwoods he works with elderly and differently-abled populations and continues to freelance when he is not floating down the river on a raft or hiking in the hills.