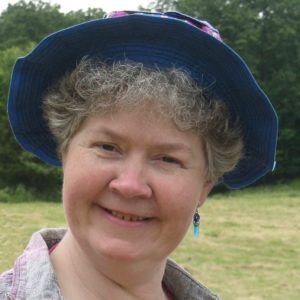 Rachel Keebler has been a painter since high school was a SA member of USA 829 from 1981-1994. Well known for co-founding Cobalt 1988, she has been Owner and Director of Studies at Cobalt Studios since 1993. She has been actively charging, painting and overseeing the Programs there ever since.

Rachel Keebler is a 1978 BFA graduate of Boston University where she studied Scenic Design and Scenic Art with Don Beaman and concurrently worked for and learned many of her painting skills from James Leonard Joy, an association which continues to this day. having painted scenery in high school, Rachel began painting scenery professionally in 1977. In 1981, Rachel was accepted through the practical exam into USA 829 while she was teaching at UNCSA. Among other venues, she has taught at Temple University, the University of North Carolina School for the Arts, University of Michigan Kalamazoo, the Krannert Center, USITT national Conferences, USITT Chicago, USITT Chesapeake, and at the Hong Kong Academy of Performing Arts.

At Cobalt, notable projects include full Nutcrackers for Miami Ballet, Toledo Ballet, the Chicago Tribune, Richmond Ballet and Charlotte Ballet. Tours include Einstein on the Beach (twice), A Christmas Story,  27 years of Hasty Pudding, Busch Gardens, Disney Cruise Lines, drops for Baryshnikov Productions and Twyla Tharp, 9 years of Manhattan School of Music operas, backdrops for the Broadway production of State Fair and Pippin and many other happy customers.